A blog dedicated to budget friendly DIY ideas for interior design and home decoration with a focus on real projects, fresh ideas and evocative

I’ve had quite a break over Christmas and New Year but back now and kicking the year off with a project from one of my favourite designers… Mixing pattern, textures and materials are the key to Studio McGee’s designs, for example juxtaposing a leather sofa next to a linen sofa. A dark almost black buttoned […]

Another fabulous project from Studio Mcgee, contemporary meets traditional… What’s not to love about this space, a mix of contemporary pieces and traditional give it a modern look with a heritage nod. Textures are big with Studio McGee and if you look closely at the coffee table in image 5 you will see it has […]

Crib Creative  If we want to make a personal good impression we will want to dress our best, this can also be said of the first impression one receives as they step inside our home… When someone visits our home for the first time, it gives them an impression of the person we are, it […]

Described as “Cape Cod meets West Indies”, another fabulous project by one of my favourite design companies. The exterior architecture of this new build leans towards Hamptons, however Black Band Design have also injected a tropical feel inspired by quote, the “vibrant waters of the Caribbean”. When planning a new build by oneself with no interior designer […]

1.  Image via Mercer Interior The word, ‘boho’ may conjure up a riotous mix of colours and patterns, muddle these together in a messy but creative way and throw in some greenery and you may have the boho of the past. However, today boho can be far more chic, in fact…..’boho chic’. ‘Boho’ stems from the word […]

“Casual and sophisticated, modern and timeless, serene but colourful” is how the designer describes this relaxed, South Carolina home. The designers, Guest House Studio, have used varying shades of blue for this project, with paint, soft furnishing and artwork. Blue is ‘cool’ on the colour charts but can evoke a moody or calming affect when you […]

A Cottage Interior Perfect for Coast or Country

Peek inside a gorgeous cottage of blue and white with the addition of a few surprising colours. Designed by award winning interior designers and home builders, Cottage Company of Harbor Springs, this sweet home has the perfect balance of style for coast or country. Specialising in creating “beautiful, classic cottages where generations of families can […]

Breeze Giannasio is an interior designer to the stars and I literally have stars in my eyes when I see the transformations she makes to these Hollywood homes. I’ve been in love with the distinctive style of designer, Breeze Giannasio since I viewed a video of her transformation of Mila Kunis parents condo on Houzz. Breeze takes […] 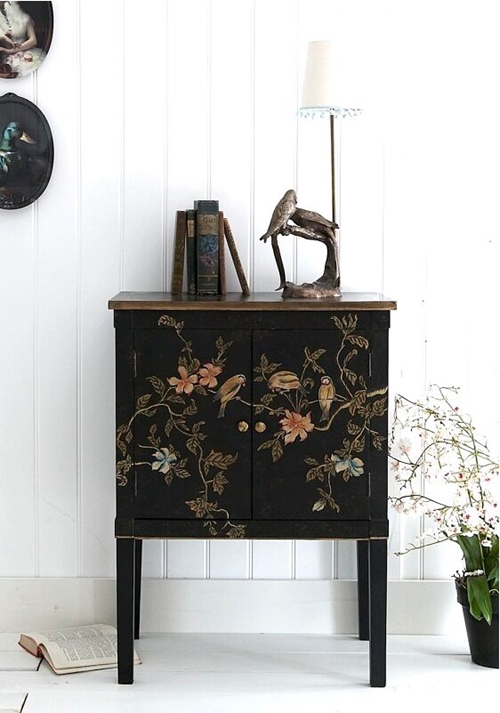 1. A chinoiserie design painted cabinet
Chinoiserie, a strange word some might say, others may conjure up a mix of patterns depicting birds and flowers and colours of emerald green, blue and emperor red, a somewhat confusing space of oriental origins. This may depict chinoserie of the 18th Century, however today’s designers have a less busy approach to making it work for this century and today’s homes.
Born in the 18th Century of European design, stemming from the ceramics and textiles of China, this eclectic style became a global phenomenon by the late 18th century. Drawing inspiration from this style, however using it in a more subtle way can look fabulous in today’s homes.
I’ve been looking around at ideas that stem from chinoiserie, yet have a more youthful feel. It may be the simplicity of the cabinet above, painted in chinoiserie style needing little to show it off. Or the vibrant powder room below which features a striking wallpaper of zebras teamed with a metal bamboo mirror of Chinese influence. The look is definitely a modern take on chinoiserie and the designs reflect a modern take on Chinoiserie. 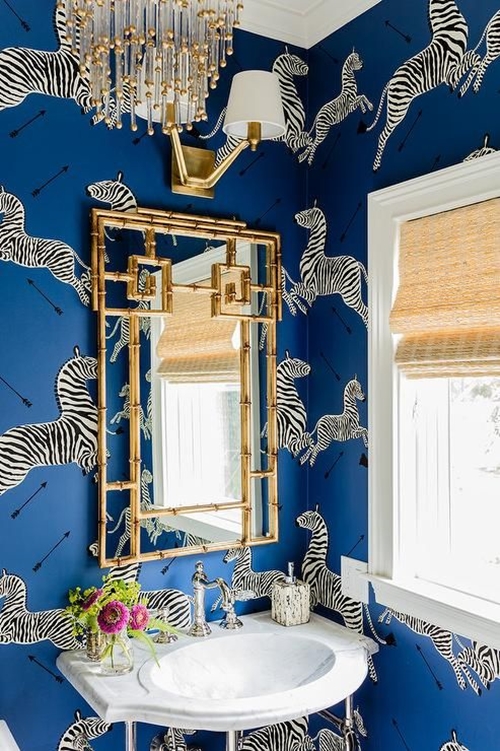 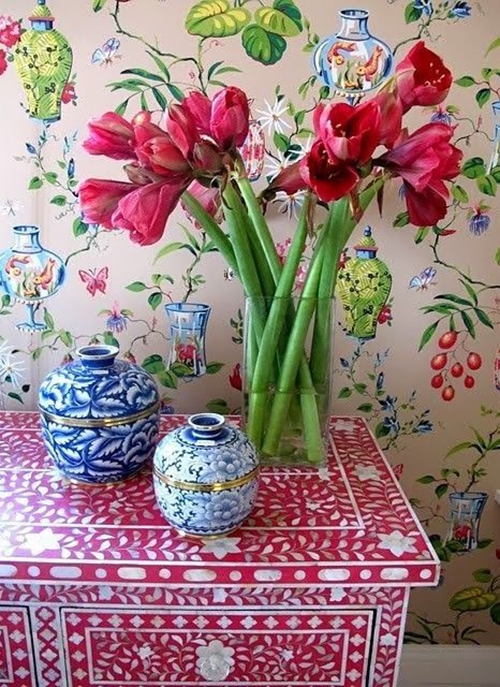 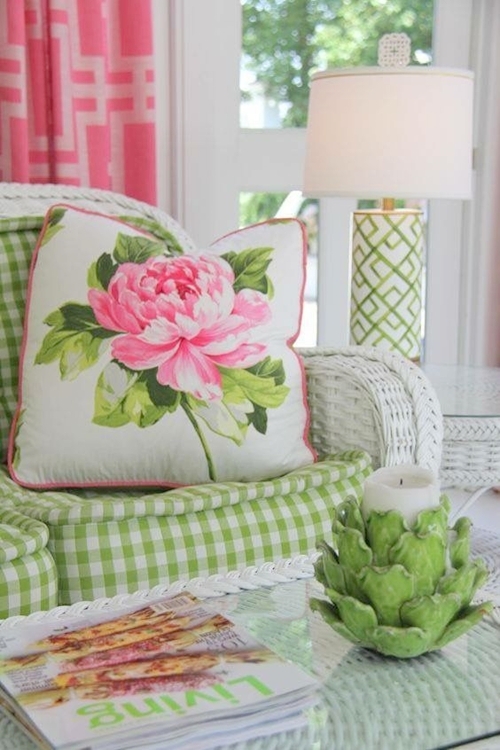 4. Not so much chinoiserie in design, however the mix of patterns and colours are what chinoserie was originally about and I feel these soft colours and patterns work beautifully together – Image via 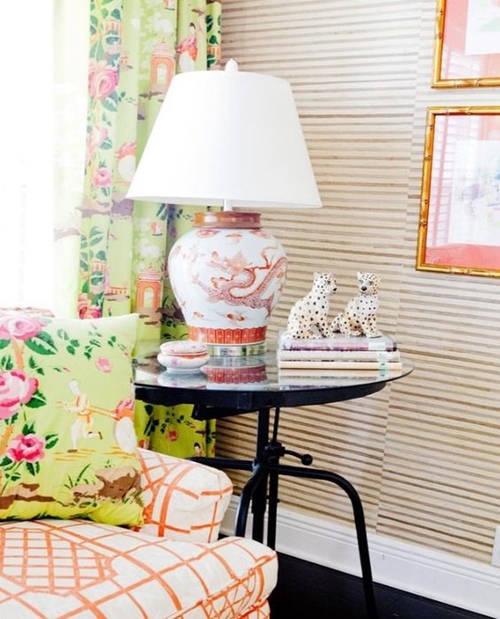 5. Defintely a modern take on chinoserie, pattern colour and ceramics – Image via 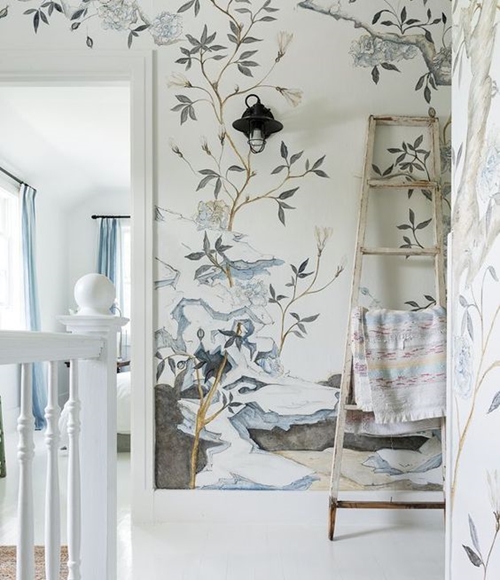 6. A subtle use of an 18th century style design wallpaper, where less colour and less pattern work beautifully – Image via 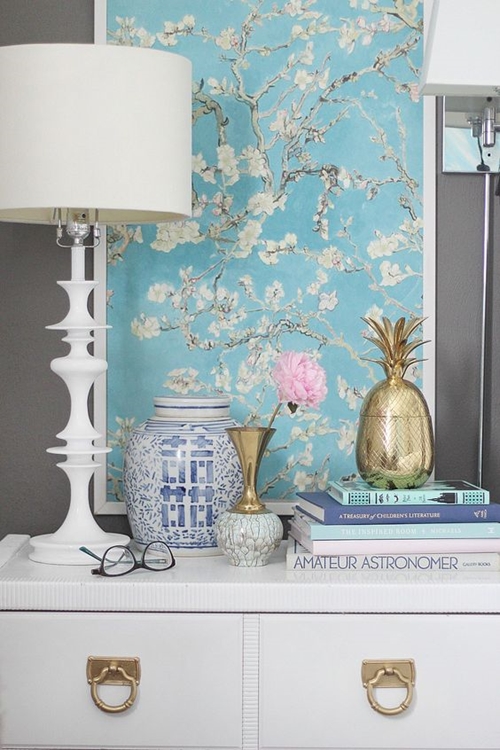 7. A panel reflects chinoiserie style, the Chinese ceramics are typical and the drawer handles look like bamboo – Image via 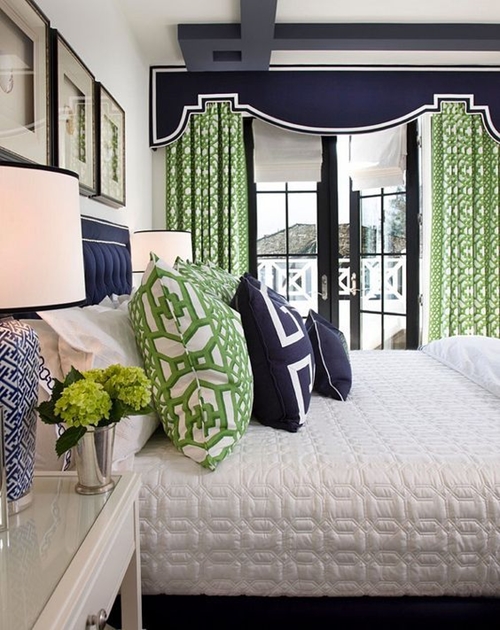 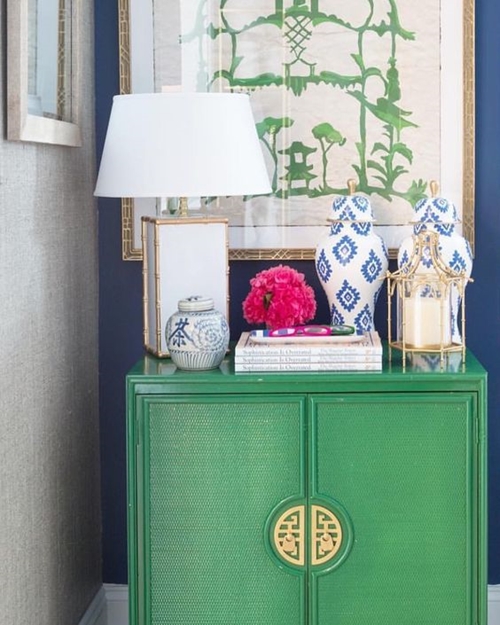 9. A modern mix of colour and pattern – Image via 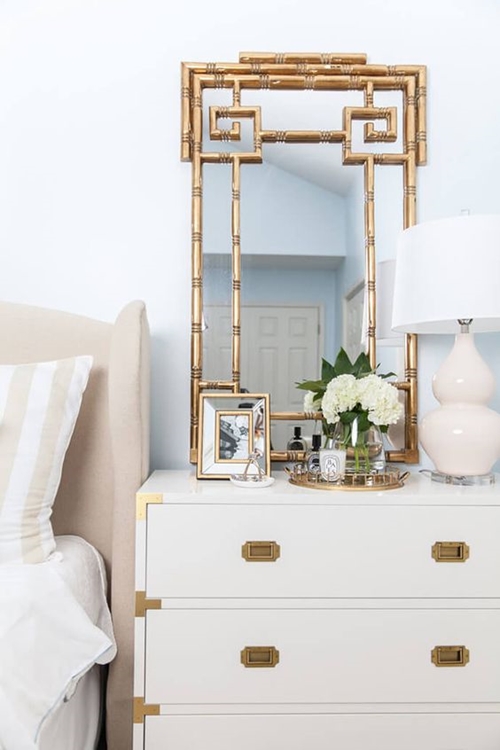 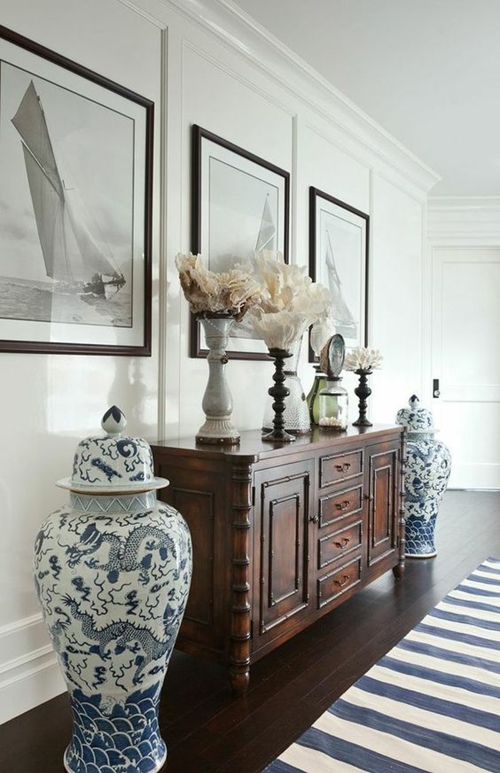 11. Blue and white with a little Chinese influence in these stunning, over sized ceramic ginger jars – Image via, Design by Barclay Butera 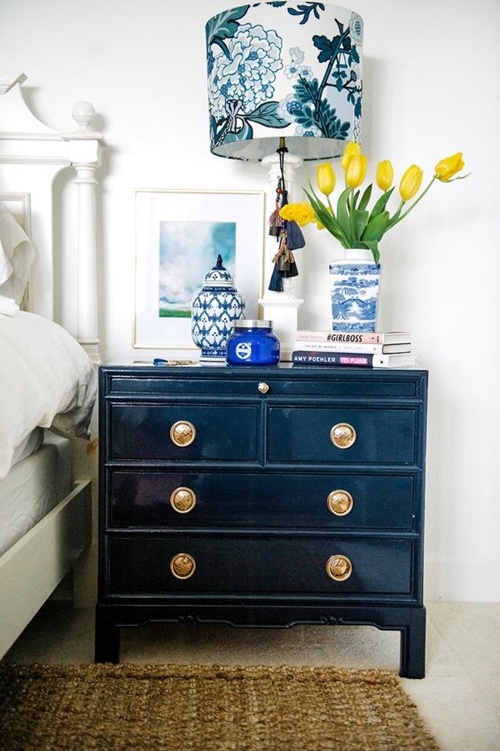 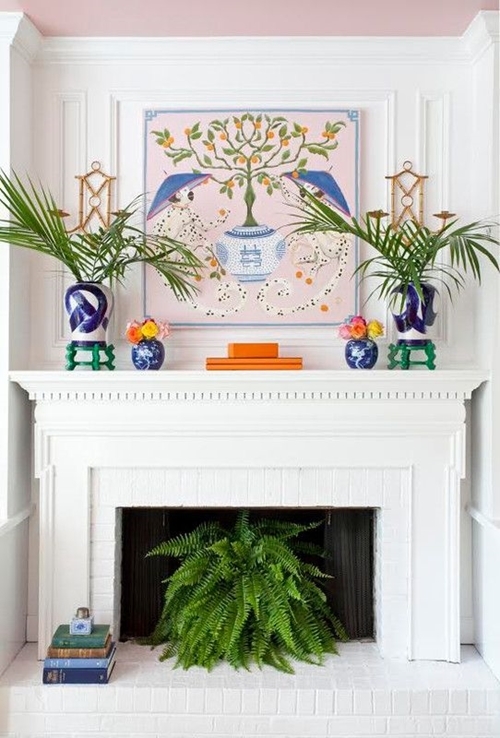 13. Symmetry features in chinoiserie – Image via, photograph by Christina Wedge 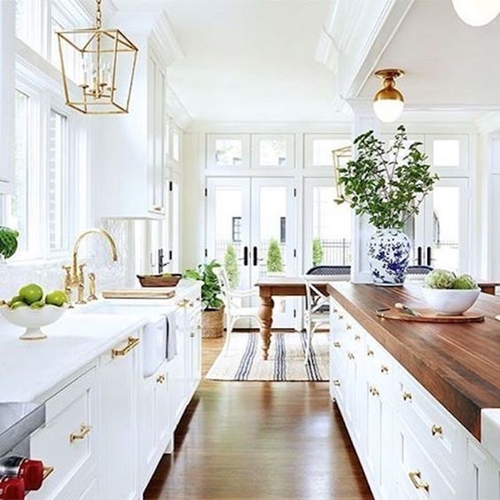 14. A Blue and white ginger jar used as a vase is a subtle touch of chinoiserie to this all white kitchen – Image via 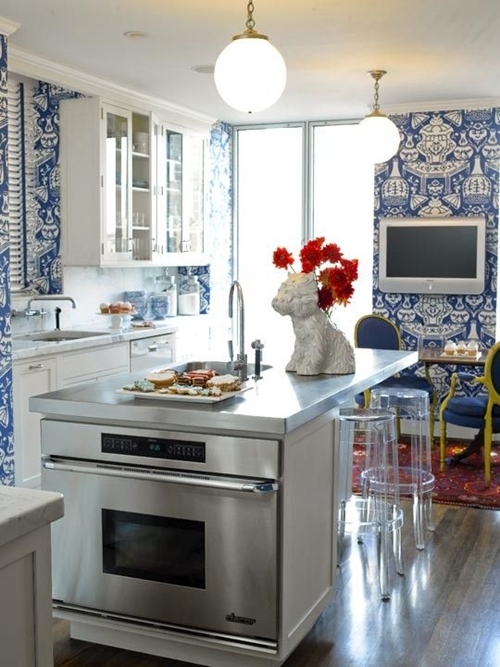 15. Opt for a feature chinoiserie wall – Design David Hix, wallpaper Quadrille
I hope you have enjoyed these images, they are what I personally perceive as a modern take on chinoiserie, whether by the use of ceramics, textiles, furniture or decorative wallpaper. If you are drawn to this style, think, “less is best” to achieve a modern chinoiserie look.
Have a lovely weekend