Bricks are used extensively in
construction at all levels, from thatched roofs to multi-story buildings.
Except for slight changes, the brick-making technique has remained unchanged
for many years. Bricks are the oldest building material that is still widely
used today due to their durability, availability, and low cost. Building
quality has greatly increased as a result of refined brick production and
burning procedures. 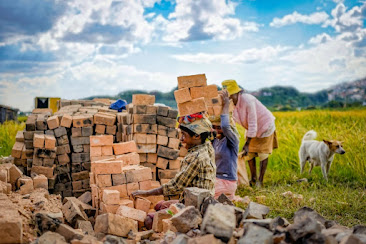 The manufacturing procedures vary
greatly depending on the type of clay used, the machinery available, and so on,
and the following is a quick basic overview. Bricks are formed using either
technology or by hand.

The majority of bricks are manufactured
by machinery. The various stages are as follows: 1.Earth preparation,
2.moulding, 3.drying. 4.burning.

1.     Earth
preparation – After extracting the clay or shale and removing large stones or
other unwanted debris, it is carried to a granulator and finely processed by
massive spinning wheels that force it through small perforations in the mill’s
bottom. 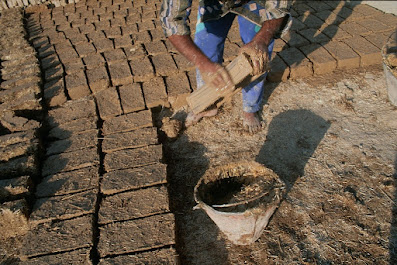 Moulding– There are two types of
machine-made bricks: wire-cuts and pressed bricks.

Wire-cuts Bricks are formed in the
following ways: The fine clay from the pug mill is driven through a mouthpiece
(about 215mm by 102.5mm) of a continuous band machine and carried by rollers to
a frame with several fine vertical wires spaced 65mm apart. A part of this
continuous band, equal in length to the frame, is forced forward through the
frame by a metal plate, and wires separate it into ten or more 215mm by 102.5mm
by 65mm clay slabs. 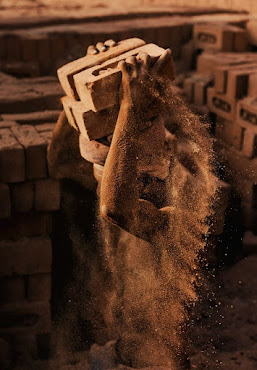 Pressed Bricks- Of the many various
types of machines for pressing bricks, the smallest is operated by hand and the
largest by steam power. The former consists of a metal box the size of a brick
enclosing a wire-cut clay slab as described above. A descending metal plate
applies pressure on the clay to consolidate it before it is removed.

The larger machine is made out of a
spinning table with twelve or more boxes or dies, each the size of a brick. As
the table rotates, each die is carried under the hopper containing the prepared
clay or shale, a pusher in the bucket descends and forces the clay into the
die, and raw brick (or slab of clay) is pused out as the table turns.

Both of these activities are
performed in a modern kiln, one type of which has numerous chambers, each of
which may hold 40,000 or more pounds and is laid out in alternate layers at
right angles to each other. Heat from gas or coal dust is gradually added until
the maximum temperature is reached (which is maintained for about two days), at
which point the bricks are allowed to cool. The loading, drying, burning,
cooling, and emptying of the kiln can take up to two weeks, and because it is a
continuous process, the finished brick chamber is emptied everyday.

The bricks are ready for fire once
they have dried. The temperature of the kiln is determined by the content of
the bricks. Kilns typically maintain temperatures ranging from 900°C to
1200°C for each type of brick. The components within the brick form a
ceramic bond during the fire process, which hardens the brick and guarantees
that it retains its shape. Firing ensures that bricks can withstand extreme
weather conditions such as rain, heat, and cold, as well as foot and tyre
traffic. 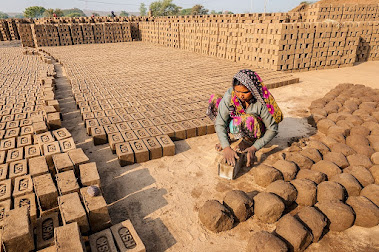 While most bricks are
machine-made and utilised for common uses (because to their low cost), there is
also a demand for hand-crafted bricks for superior facing work. The drying and
burning techniques for the preparation are similar to those already detailed,
but the moulding is done by hand. The mould is made of wood or metal and looks
like the sides of a rectangular box the size of the necessary bricks. To
prevent the clay from sticking to it, it is either wetted or sanded. The
moulder takes a part of the prepared clay sufficient to fill the mould, shapes
it roughly, and dashes it into the mould. The clay is squeezed with the fingers
to completely fill the mould, and the slab is levelled off with a wood fillet
or a piece of wire stretched across the top. The slab is then removed and
directed and burned in the kiln.

Let us know in the comments if you learned anything new from
this blog. Share this blog with your friends so they can learn about the
production process as well. You can join our telegram channel @trishnadesign so
that you will get notifications from our various social media platforms.