So….you’ve decided that you want to learn more about lettering?

Next question: where do you start? There are so many routes to take, so many of areas of expertise to follow, so many skills to learn. It can be pretty overwhelming, am I right? What we all need is a book that touches briefly but thoroughly on a whole host of those different options and, whaddaya know, I have just the thing!!…May I introduce Creative Lettering and Beyond by Gabri J. Kirkendall (published by Walter Foster Publishing, £12.99). 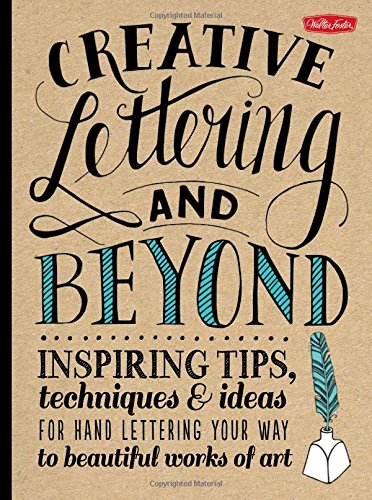 This book will help you see the wood for the trees. Creative Lettering And Beyond teaches four quite distinct writing skills: Modern Calligraphy, Illustrated Lettering, Chalk Lettering and Lettering Crafts. It’s got rave reviews on Amazon and I can totally see why: it’s BEAUTIFULLY presented, full of great ideas and good advice.

Throughout each chapter, four different authors take you firmly by the hand and then lead you gently, knowledgeably, through the maze of new skills. Lets’ start with Modern Calligraphy…..this was already a definite in my mind and Creative Lettering and Beyond confirmed without doubt that this was a skill I most definitely wanted to learn. The author Laura Lavender (and who wouldn’t want to be called Laura Lavender?!) does well at emphasising that, whilst Modern Calligraphy is based on traditional calligraphic fonts, the aim is to find your own unique style. She calls her own style Modern Vintage, which is a little different from the look you might have come to expect from seeing other Modern Calligraphy. Laura Lavender has given it her own special twist. The Illustrated Lettering chapter takes those incredible images of inspiring quotes in beautiful scripts that you must have seen on Pinterest and breaks them down into simple, achievable chunks. Each of the chapters actually gives a slightly different take on ‘traditional’ Modern Calligraphy, so don’t stop reading at chapter one!

The Chalk Lettering chapter will get you reaching for tools to create your own blackboard before you reach the end of the first page. So many possibilities!! And the best bit? You’ll feel as though the gorgeous examples are in your reach! And, lastly, Lettering Crafts, brings it all together, giving lots more examples of each craft to make every part of your life beautiful!

Reading Creative Lettering And Beyond left me sure of precisely the skills that I wanted to begin learning, whilst also being able to put aside other areas that appealed to me less. After finishing, I was ready to get going……

So guess where we’ll be heading here on Modern Country Style….?

One Pound Meals By Miguel Barclay